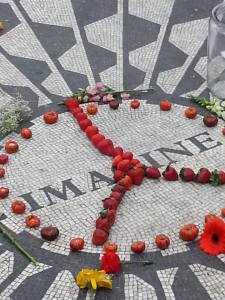 A lyric from one of my fave Fab four tunes penned by John Lennon. The Fab Four, the boys of Liverpool, The Beatles. In retrospect I use the Beatle as a barometer of the status of my coming of age. When they took the US by storm I watched them on The Ed Sullivan Show. Back then we had only one TV and after the family deliberated we watched whatever we decided my Mom an Dad had chosen to watch. It was my introduction to a one sided democracy, but I was too little to engage in politics at that time. No matter, it was cool, the times were different then and that’s how most families viewed this high tech medium we called the idiot box. The family gathered and watched one of three channels, and The Ed Sullivan Show dominated Sunday evening prime time in most homes. I was excited because there was some new band from England on the show that night and they had girls screaming their names. I have four older brothers so my introduction to rock and roll was their 45 record collections of acts like The Everly Brothers, The Four Seasons, and a slew of others including Elvis the Pelvis Presley. I sat on the floor transfixed as The Beatles played a few way cool tunes! Mesmerized! When they finished I knew I had my own music now, The Beatles. The next day I decided I was gonna take the greasy kid stuff out of my hair and try and sneak some bangs past Mom.
Growing my hair proved to be much more difficult than I believed it would, but I kept at it. For years! Through tears, arguments, fights, and a few times being physically dragged up to Frankie The barber for a nice crew cut I did everything within my limited power to have a Beatle haircut. Eventually I prevailed, but that one night of Ed Sullivan changed my life. I rocked out to the hard driving love song of the boys and other acts like them for the next two years. In December of 65 is when Rubber Soul came out. Game changer!!! I was all of ten years old and suddenly my music world expanded immensely. Unusual instruments and sounds and their hair went from cute mop tops with bangs to a longer cut, like a girl. That’s what I wanted. I read every teen magazine article on the Beatles, bought whatever 45’s came out, and was changing along with whatever The Beatles did. The next album was “Yesterday and Today” which is when I learned what controversy meant. The cover of the album was described by Paul as “Our comment on The Vietnam War” , sometimes refered to as “the butcher cover.“ The boy were dressed in butchers smock with meats and plastic oll parts on them. It pissed off my Mom and Dad, sso I knew it was important and I embraced the Beatles even more. Now at age eleven, I was learning about politics while listening to even newer sounds by my hero’s.
Toward the end of that year is when Revolver came out, and it had the song I spoke of in the beginning,. “She Said She Said” which grabbed me instantly, along with many other psychedelic sounding songs. I went out to Spencer Gifts and bought black lights, lava lamps, strobes, and Day-Glo posters. I was dressing according to what they wore, or what the “Mods” were wearing on Barnaby Street. I attempted to part my hair in the center and grow it longer. That led to out and out battles, in which I did some profound personal growing. I began fully understanding politics, and in two years I would understand what Timothy Leary meant by “Turned On”
After Yesterday and Today, it was Sergeant Pepper, Magical Mystery Tour, and Yellow Submarine and by 1969 I was on my way from being a “Mod” kid wearing the latest fashion, Nehru jackets, love beads, granny glasses, and balloon sleeve shirts to becoming a hippie. As the Beatles changed, so did I. John Lennon had more influence on me than anyone else in the world, including teachers and family, and I had never even met him. But I listened to every interview, read every story, and followed all the escapades involving The Beatles in general, and John in particular. My devotion to peace, my devotion to equality, and my coming to understand hypocrisy was all due to following John Lennon’s philosophies.
I remember when Kennedy was shot but didn’t fully understand the implications.But I got that it was a profound moment in all our lives. I was much more aware when King, and Robert Kennedy were shot, fully aware of the implications. I followed the happenings of the Chicago Eight, or Seven if you forget Bobby Seale, became involved in protests, sit ins, attended peace rallies and was far more in tune to life than ever before all due to growing emotionally, mentally, spiritually, and politically along with The Beatles. I was fortunate to grow up in that era an I took full advantage of what they offered, way beyond merely their music.
I wasn’t prepared for what happened December 8th, 1980. Now another cog in the working class with a family. I was paining my kids playroom and listening to the radio when the music was interrupted to tell us that John Lennon had been shot an killed. It was a deeply felt emotional punch to the solar plexus. I put the paint brush down, sat on the step ladder and wept. The collective shock and sorrow felt by fans was like Images of broken light which dance before me like a million eyes. They call me on an on…..Across the Universe.
A friend who taught me right from wrong, and weak from strong that a lot to learn. What can I give you in return? To Sir, with love…Peace
IMAGINE .