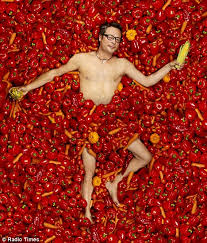 Its hotter than Hells kitchen, bigger and harder than any of the Top Chefs, more dangerous than having it Chopped. Its here and its sure to make the Doughboy rise and pinch Melba‘s peaches. The Buck Bone Naked Chef lets it all hang out in this bare bones competition that leaves no sharpening stone unturned. Watch as three culinary contestants ply their culinary trade in the buff. That’s right, three naked chefs competing for the coveted title of The Buck Bone Naked Chef.
Tonight We’ll see if Jack has what it takes to whip up your soufflé or fall short. Will Destiny get the dough to rise or end up going down? Will Stan fluff his meringue into stiff peaks or take it on the chin. Join our three judges Ben Dover, Hal Apeno, and Helen Back as they choose who’s naked body raises their bar and who goes home fully dressed and unsatisfied…
I’m your host, Hugh Jass so come join me now. First let me introduce our contestants. From Pullet Pennssyvania, Master Chef of “The Back Door”, Jack Mioff. “I’m Jack Mioff and I work 16 hour days so I won’t stop until I’ve given every ounce I have.” …He sure looks like he can go the distance, next here from Deepcavern Nevada , chef Destiny Dancer who heads up the culinary staff at “Swinging On The Maypole” in downtown Twin Peaks, “Me and my girls are coming for you boys, you better be up for it.” ….Hoho, threatening words from a pretty lady. I’m even feeling it,haha. And finally, Stan Duprite, the very popular New York City chef at “The G spot”,.. “ When I pull out my secret weapon it will bring them to their knees.”…. Oh boy, sounds like he’s got more than just a few tricks under his apron, we’re gonna have some very stiff competition tonight. So Let’s get right to it contestants. In the first round we’ll be looking to see what these naked culinary competitors can come up with using the secret ingredients, Zucchini and Oysters. Chef’s, take off your clothes and get to work, you have 20 minutes to pull it off.

Stan is off to a fast start, he has his tenderloin up on the counter and it looks like he’s… massaging it? Oh wait, I see what he’s doing, look at Destiny fixated on Stan’s tender loin. Lets listen in on our judges… “Conyo man, dat some huge tender dere Helen, si?” “Oh yea I see that thing Hal, Destiny seems to be staring too she better snap out of it and…oh wait, oh my God, I never knew anyone could peel a banana like that!” “Holy cheet Helen, Stan just dropped his meat pounder.” ..“Will you two idiots quit babbling, of course he dropped it for chrissake, look at the way that broad is eating the banana!” Wow!! Damn she’s not eating it, she’s sucking that thing and I want to take notes, if I could do a banana like that I’ll have both of you guys licking my fingers and eating me out.” ….Hoho, I think Helen meant eating out of her hand but either way everyone has stopped everything and…..Wait, what’s this?? Oh oh, this could be bad news for Stan, he may get disqualified. He has piled up all the ingredients in a tower. That’s quite an erection he’ got there, no pun intended, hope he can recover. Destiny is back by the stove and is she ever giving our viewers a view. Ten minutes to go contestants, Stan, better calm that thing down before it gets disqualified. We want you to stick it out, but not that far out, haha, and Destiny I sure hope you have something to lay on your plate. We’ll be back after these messages from our sponsors, Trojan Condoms, with their new stealth rubber, she’ll never see you coming, and our favorite fast food chain, Mc Do-me’s, they give you the meat but hold the pickle.

Welcome back folks, the final bell has rung and its time to find out who gets dressed and who gets their own reality show. Judges, lets see what Destiny and Stan have for you. Destiny, what is your entrée? “I have roast tenderloin with rolled up balls of figs. As a side I placed the tip of the banana into a sliced fig.” Oh my, that’s an interesting presentation, it looks almost phallic, Hal? …“Phallic schmallic Hugh, I jus wanna see her eat another banana.” …Sorry Hal, that trigger has already been tripped, Helen? ..”Destiny, meet me after the show!” ….Helen I’m not sure, “Piss off Hugh, let them meet Helen said I can watch! Just give her the prize and get rid of the dude.” ..Um, oh, I..I.. It doesn’t work like that Ben, we need to judge. Lets go quick, And I mean quick to see what Stan cooked up for us, Stan? …”Not that I think its even gonna matter, but I made scaloppini of pork tenderloin wrapped in grilled banana, with a cognac fig reduction and a purée of savory banana over cinnamon infused Jasmine rice.” …That sounds mighty tempting Stan, what do you thin Hal?…”Taste good, but not as good as dee chick.” Yikes, Helen? Helen? Stan, you can’t do that, get away from Helen…”Shut up Hugh, don’t stop Stan, if you keep going until I come you get my vo….oh shit, that was pre mature!!” Helen, please, this is…”Piss off Hugh. We all voted and the dude is out. Clean yourself off and get dressed Duprite! Bring those melons over here sweetheart, you’re the winner.” …. Ben you can’t say that kind of….oh, damn…We’ll be right back…CUT!!! Go to commercial now!!”
Shsshshshshshsshshshshshshshshshshshhsshhsh……….
Hello folks, welcome back I’m Hugh Jass here at The Buck Bone Naked Chef on The Sick Bastard TV Network, along with our celebrity judges, Hal Apeno, Helen Back, and Ben Dover. Well we had an unconventional show tonight to say the least but with this cast its about what we’d expect around here. We have to say good bye to a fierce competitor, but quite frankly Destiny made it hard for him from the start. In fact she made it hard for just about all of us. Stan plunged in and gave it his all but in the end he got beat by his competitor. Destiny made it so long and hard for him he just had to down, and not just on Helen, haha. His cream wasn’t rising to the top no matter how hard he was…I mean tried. Stan, put your clothes on and hit the road dude, Destiny will remain naked. “Can I just say I had a great time here. I won’t be able to beat it for a while but I am glad I came. Helen, thank you for your number I’ll give you a call. Destiny, if I had to go down I’m glad it was on you, I will never forget seeing your milk pillows bounce as you rolled out your dough. I think my only mistake was with the thickness of my pork, I didn’t pound my meat enough, but Destiny’s knockers knocked it out of the park anyway.” …Indeed they did Stan, glad to see your not a sore loser. Personally I can’t wait to watch Destiny beat her next opponents on Buck Bone Naked Chef Champions. In the meantime I’m gonna Ben Dover my Hugh Jass to Helen Back until Hal Apeno makes it Stan Duprite so Destiny Dancer can Jack Mioff. Thanks for joining us, I’m a Hugh Jass and we’ll see you next time on, The Buck Bone Naked Chef.