I’m all for protest, I grew up in a generation in which protesting made some significant changes in culture and society. But lets be clear, destruction of property and physical confrontation are not acts of protest, they are acts of vandalism and assault. Not only do they deter and undermine your message, it obliterates it because it makes you no better than those you would protest. Its very tempting and easy to say violence only responds to violence but violence only begets violence. So quit your whining and do something clever, volunteer to help, bug the shit out of your congress people with daily e-mails. Believe me in the coming year we will have more than our share of things to protest but we must remain vigilant, consistent, and most importantly peaceful. The outcome is what it is, if you need to place blame place it on those who either didn’t vote or wasted their vote on a misguided protest by going third party or write in. Don’t let violence define the new generation of revolutionists, don’t allow violent protesters to overshadow your message. If you’re angry get off your sanctimonious high horse and get back in the game the way its played. Peaceful protest, voicing your rights not destroying property or assaulting people. Grow the fuck up and learn how to protest with class and purpose. Trump is gonna make errors and its up to us to hold him to task for his decisions but not before he starts making them. Don’t act like deplorable, act like responsible citizens who have valid points to make. Otherwise your just more of what’s wrong with what you want to change.

You Trump supporters aren’t off the hook either. The only thing worse than a sore loser is a sore winner, waiting with an almost evil anticipation to gloat and rub salt into the wounds. The wound your rubbing salt in is a huge laceration and divide in our country, and by continuing to laud over those with opposite opinions you show a serious lack of character and total disregard of hurting your country. So don’t stand there all smug congratulating yourself on how clever you are by using such incredibly well thought out nicknames as Killery, Libtard, Obummer. Grow the Hell up, name calling went out with “I know you are but what am I” playground days. If you seriously want democrats to get onboard then start acting like adults not bratty children who have finally won after eight plus years of disrespecting the President you don‘t like. Your candidate has run one of the meanest and insulting campaigns in modern history. Picking on an opponents wife, discrediting his father, calling a candidate disqualified because “Who would vote for someone with a face like that, and calling out every other contender while hiding behind a Twitter account with childish name calling. Sad! Pathetic! So wipe that smug false pride off you face because that campaign was nothing to be proud of. If you would rather gloat and chuckle at the losing side then don’t give us this bullshit about just accept it and lets move on because you obviously can’t let go of petty bullshit. Look in your own timelines and see how well you accepted and supported the president you lost to. Its not about the person, its about the office and we should all respect the office of the president. Y’all just better hope that when you wake up after being Trump Drunk, you don’t find yourselves in a country with a major hangover…
My final take, you can’t “drain the swamp” and then fill it with bigger alligators and expect the swamp to be safer. We have enemies, we have cultures of people who would like nothing better than to defeat us in front of the entire world. The number one rule if there are rules at all in military conflict is to divide and conquer. That strategy has been used since strategies of military domination began. We are being divided by ourselves and our enemies are ecstatic. We’re doing their work for them by baiting and insulting each other. So we all have a choice, we can sit back and watch ourselves divide us or we can unite. But we will never unite if we want to play chicken and keep playing I’m right and you’re wrong culture. Neither side has all the answers or a solutions. Its our diversity and our ability to keep open minds that will either make or break us. So go out and protest, stand up for your rights but never lose sight of the power of inclusion and unity and quit trying to kick each others asses. Rant over, you decide…. Live and love in peace… or perish in a narrow minded culture of senseless one up-manship……

Come on suckers gather around

Listen to the loudest snake charmer in town

I build people up so I can beat them down

Throw your vote down my hallway this way to egress

Jump on my bandwagon please donate

All by myself I’ll make America great

If you wanna know how you just hafta wait

Cause there ain’t a single plan here on my plate

Let me deal and steal your right to vote, this way to egress

No foundatrion my words are purely baseless

Screw the elder victims to me their faceless

Some say my eminent domain is a little abrasive

Bit what can you expect from a misogynist racist

All the things I do will leave our country a mess

Making me the Prez the quickest way to egress

Put me in charge so I need to feel the power

I got a million insults to make every race cower

My White House will become a giant golden shower

As long as I’m in power, this way to egress

Egress, The action of going out or leaving, direct means of departure

This way to egress was one of P.T. Barnum’s most infamous scams. While in his Barnum’s American Museum signs were strategically placed that read “This way to egress”, egress being a word many people did not understand. Mr. Barnum realized people spent too much time there and needed more revenue so he placed the signs strategically knowing people would follow the signs out of curiosity only to find they had exited the show and would have to pay a second admission if they wanted to return. Don’t throw your vote out the egress, educate yourself about the issues and formulate informed opinions based on fact or reasonable speculations no matter which party you support. Don’t make knee jerk reactions or be a slave to a political party, choose which candidate you truly believe will do right by We The People.

No more commercials, screamers and criers
Time to analyze our spanking new pile of liars
So smile everyone we gottem on the run
Another new congress to get nothing done 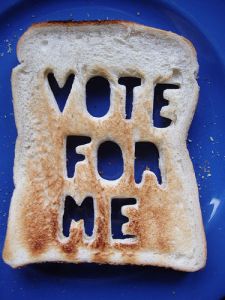 Tuesday, the national day of elections, the day all the bullies on Facebook an Twitter or any other medium for their pulpit scream at me to get out and rock the vote. “You’re vote counts” “If you don’t vote then you can’t complain” Oh yea, they dip it in honey or drench it in sugar so its cloyingly sweet and well intentioned but it bullying just the same. Get off my back!

Its my right to vote. Its also my right not to vote and it my right to complain whether I voted or not. So the voters make up the rules? Bullshit, you think your vote is almighty and uber important? Your vote is a teeny weeny blip on the tally. When the last time someone one by one vote uncontested? Some states flip coins, some draw cards, some have run offs, but its never cut and dried in the event of a tie. But maybe you’re right, maybe my vote is the one vote that will decide the fate of an entire state. Obama was declared winner before all the voting was even done. Bet the west coast slackers didn’t feel like their vote counted, maybe they should have gotten off their assess and gone earlier!

So quit your goddamn bullying and get off your high horse and leave me alone, I am reasonably intelligent (seemingly more so with autocorrect) and I have a pretty good idea how the vote works. I know its today and I know where and how an if I choose to vote that’s my option, I won’t be bullied into thinking that if I don’t I have somehow messed up the whole system and fell short of my duty.

So I may vote, I may not. Either way if I am unhappy with the performance I will complain. I have endured weeks of irritating political commercials, robocalls that insult me by assuming I’m such an idiot that I haven’t got the wear with all to make up my own mind, and (ahem) friends on face book who apparently excelled in political science and economics in school although I don’t remember that back in the day and I seem to remember most of them at protests with me. Maybe that was before they got seduced by the almighty dollar, the corporate concept of Inc God We Trust, and having a little money has clouded their youthful idealistic dreams of living in a world that’s fair and just. Maybe we should go back to those idealistic values. Lets take a vote! ……PEACE