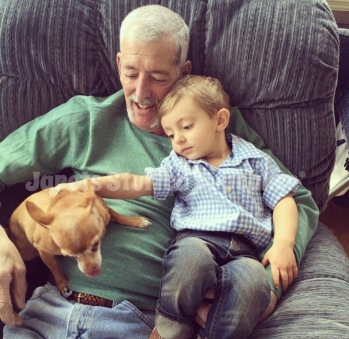 It was a beautiful morning, much like today, seven years ago, on Wednesday, June 22, 2011, Keith and Kellie were by my side, as I was putting on my hospital gown and getting into a hospital bed.  We were all making nervous small-talk, and Keith was making his usual sarcastic puns and quips. As the anesthesiologist comes into the room, all I said to him was I better wake up…

When Keith and I opened The Petite Cafe in 2001, we were new to the town of Nutley, NJ.  As the years went by, we got to know so many wonderful people that eventually became friends. One such family was the Paserchia’s.  I met one of the daughters first, Leanne, then her sister Kim and then eventually their parents, Dennis and Denise, and brother Christopher.

Around 2006, Leanne came with her family into our cafe for Sunday brunch, and her mother, Denise was visibly shaken.  When I asked what was going on, they told me that Dennis needed a kidney transplant, that he was a difficult match, and had no prospects for anyone willing to be a living donor.  I said to them “I’ll get tested, what do I have to do?” They all looked a little shocked, but they told me that I needed to get a blood test. I told them “great I’ll do it!” During that little conversation, brunch is booming, so I went back to work, and I casually walked up to Keith, who was in front of a sizzling stove, with pancakes on one side and eggs on the other, and said “Um, Babe, I am donating my kidney, to that guy over there!”  Without skipping a beat, he said “oookkkaaayyy,” while flipping the pancakes!!!

A few days later, I went to St Barnabus, in Livingston with Keith, and we met with two great people Marie Morgievich and Dr. Shamkant Mulgaonkar.  They loved Dennis; his wife donated her kidney six years earlier, and he rejected it. They were very anxious to get him a new Kidney. When we met with Dr. Mulgaonkar, he took out his pad and pen and proceeded to show us how this was going down.  He was so amusing in his explanation but, I was not sure if he was trying to scare us or just wanted us to be very well informed.   But after he proceeded to explain, EXACTLY how they were going to cut into me and take my kidney, he said, so are you still interested??  I said of course! You don’t scare me; this is EXACTLY what I want to do.  Keith told the Dr., “she made up her mind Doc, there is no turning back, now” Dr. Mulgaonkar, said great, let’s get you tested!!

Unfortunately, I was not a match.  Now, understand that being a match for someone is very difficult, even within a family.  But if you don’t even get tested, you will never know. There was another option, it was called a “chain donation.”  So this is how it works, Dennis needs a kidney, he needs someone to donate for him, whether it is a family member, friend or stranger.  Once they have that, next is finding another person (let’s call her Laurine) in need of a kidney whose family member wants to donate, but does not match her either (let’s call her Kathleen)  I match Laurine, and Kathleen matches Dennis. So, my kidney goes to Laurine and Kathleen’s goes to Dennis. Thus the chain, I hope that makes sense!  The big problem is still getting that person who will match Dennis!!!  When family members, friends or even strangers, do not step up, it makes it difficult for the person in need, to even get the opportunity at life!!

For the first few years, nothing happened, there was no match out there for Dennis! Meanwhile, poor Dennis was on Dialysis this entire time, up to 4 times a week. Then one day I get a call from Marie, and she tells me that we have a match.  I had to go to the hospital for tests, which includes a cat scan, pap smear, and mammogram. Everything came back perfect! I am ready to go!!

But then, the call that brought everything to a screeching halt, just a few days before the operation!  One of the people in the chain – I believe it was a chain of 8, decided to back out, because his wife’s friend wanted to donate to her, and she was a match!  He was delighted he did not have to do it, backed out and the whole chain fell apart! I was so angry at the guy – HOW DO YOU DO THAT???, all these people are counting on you?? So now we wait again!!!

We waited nearly a year, and around June 10, 2011, the phone rang.  It was Marie, who said, ok we have a chain again, we think that this is solid!! Everyone has to come back again and get all the tests done, again, to make sure that nothing had changed.  If everything is good, surgery is June 22!

On Wednesday, June 15, 2011, I went to St Barnabus, for my tests, I had the mammogram, pap smear and then the cat scan.  Now the cat scan is where you have the iodine injected for contrast. Once the Dr. started and injected the iodine, I laid down on the table.  It was so weird, but I let out a very fast, short sneeze!  I had no idea where it came from because it actually startled me. After a few moments, my eyes started to itch, but I could not move yet, the Dr. asked me if my eyes were itchy (my thought was – how does she know that) and I said yes, she said, Ok, I need about 16 more seconds, can you hang on until then, I said sure!

When the test was finished, the Dr was right there to help me up.  As I swung my legs to the floor, now my eyes were very itchy.  She said to me “I think you are having an allergic reaction.”  (Apparently, the sneeze was a warning sign for her) I said, how is that I had this test before, this did not happen. (When your body has an allergic reaction, the first time you are exposed to whatever it is that you are allergic to, your body says “oh we don’t like that,” and it is the NEXT time you have been exposed, that is when the reaction happens, interesting right?!!?!!)

The next thing I know, as she was helping me walk from the imaging room, I started having difficulty breathing.  I happened to bring my daughter Kellie with me that day, without Keith, and she had to watch as my face blew up, and got swollen.  She said, “what is wrong with you, mom?” I was bewildered, I could hear the Dr say to me, “Maureen you are in “anaphylactic shock” a reaction to the iodine, I am giving you Benydryl, it will stop the swelling.”  However, what happened, was that it got a lot worse before it got better. She called for a gurney and laid me on it. I was beginning to panic because I could not breathe, I told the Dr. to get Kellie out of here, and then next thing I knew I took in a breath and could not exhale, I hear in the background Code Blue, Code Blue!!

Next thing, 14-15 doctors, and nurses are surrounding the bed looking at me, and one said, I am going to put a breathing tube down your throat to help you breathe.  I shook my head NO, and I knew if they did that I would have to stay in the hospital, besides I was starting to feel a little better.

By the time Keith got to the hospital, I was down in the emergency room, but feeling better and still swollen.  Keith told me that he “was so freaked” out that he was not here for me, and he was so happy to see my face – even though it didn’t even look like me!  Before we left, I asked the Drs., am I ok to have the surgery next week?!?! They said yes you are, my reaction was “GOOD”! After a few of hours, I was okay to leave and I even drove home.

That Sunday, June 19th, was Father’s Day.  Our store was open, but a Street Fair was going on, and Keith and I decided to take a walk. As the surgery was looking like it was really happening and I was feeling excited and anxious about it.  I knew it was the right thing to do, especially since Organ Donation has been in my life, ALL my life – but again that is another story, for another time! As we were enjoying the day, I said to Keith, “I know that Wednesday was scary, but I need you to promise me one thing, that if the surgery goes south, you won’t be angry with me.”  We stopped walking, and he said to me “How can I ever be mad at you for doing something so beautiful,” I gave him a big hug and said to him, “Ok bring on Wednesday!”

Which brings us back to the beginning of my story…

I kissed Keith and Kellie, then I was wheeled to the OR, they helped me on the bed, hooked me up to IVs, and the surgeon came in and said, “Ok, Maureen, are you ready?”  I said I am, and he said, excellent! That was the last thing I remember until I woke up!!!!

The surgery was done Laparscopic, there were three tiny incisons, they cut the Kidney out, stitched up the vein that connected the kidney and closed me up.  It was about an hour and a half.  Done!!  Now I am not a wimp, but whew, I was definitely in pain, I will not sugar coat it!  Even with the painkillers, it was not easy.  But, I woke up jubilant, the first thing I asked for was “how is Dennis,” they told me he was doing great!  I was beyond thrilled! The surgery was an eight-person chain, my kidney went to a woman in NYC, and Dennis got his kidney from a person, who was from California!  It was such a great day! The lives of eight people changed forever, and I am so proud to have been a part of it!

Dennis did have some issues post surgery, but once he was feeling better, he began living his life without Dialysis!!!  Life was great, and so was his life with his new grandson.

Sadly, after living with this kidney for nearly 7 years, in March, Dennis rejected the kidney, and he is now back on Dialysis!  This does happen with organ donation, he will now be a more difficult match, but if no one steps up to be a living donor, then he will not get another opportunity! We cannot let this happen!  Consider being a Living Donor today!  If I could, I would do it again, I am very passionate about Organ Donation, and to me this was really No Big Deal!

8 thoughts on “No Big Deal”