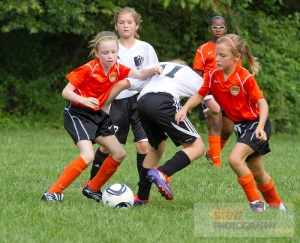 No Athletic supporters for girls

A sure sign of autumn is a field of young aspiring athletes in full football gear banging helmets and shoulder pads, while being protected by shin pads and that ever present gonad guarder the jockstrap, or as its referred to in mixed company, the athletic supporter. The boys need to protect the area that houses the swimming team of aspiring sperm cells hoping to be the future generation. So on with the sumo wrestler looking undergarment with that little cup offering assurance that if they play their cards right, someday they will be watching their own little boys wearing a protective supporter. But that’s not the support the boys get that is so overwhelming to me, it’s the support of the Moms and Dads, brothers and sisters that make a social event out of football practice. Lawn chairs, camera’s on tripods, and cheering families are in full force at the sport field in my area. The young lads perform admirably for their audience who are yelling and cheering, running up to get snacks at the concessions stand, and exhibiting their support for the boys. And that was just a practice! I witnessed this as I attempted to take my daily walk with my wife around the track that circles the fields.
The time comes in life when you decide its time to take your health serious, and I am hoping its not too little too late, but eating right and exercise have become more of a priority. When weather permits we go to a track a block and a half away which until recently was used by softball teams with a modicum of supporting casts. A beautiful new track that encircles a huge field, enough for two baseball games or a football and soccer game simultaneously. The track is about one third a mile so six spins gives us a two mile trek an great workout. Every once in a while we need to pass some slower people, or get passed by runners, and occasionally a child watching the game gets in the way, but its rare and a peaceful unobscured walk for the most part. That is until football started.
The first day of football practice we arrived at the track all stretched out and ready to hoof it for a two mile power walk. The level of noise on the way down to the track betrayed the fact that a lot of people were there, but not sure in what capacity. To our dismay when we arrived it was way more than just a lot, it was an over abundance. Two football teams, pee wee and teens, and two cheerleader squad practices were on the field and scattered all around the track were family members and what seemed like every relative of every child in town. It wasn’t a football practice it was a suburban social gathering of ginourmous proportions, way bigger than a PTO or town hall meeting combined. At first it was sorta uplifting, to see such a family oriented gathering watching their youngsters ready to compete in a sporting capacity. And it would have been awesome if only the families had a smidgen of consideration for other people. Unmovable congregations of not bratty teens, but moronic grown ups acting like teens. Bad enough they wouldn’t even consider moving in the slightest to allow others easy passage, but the moronic parents were seemingly unaware of what their kids were up to. Toddlers to pre teens running wildly, on scooters and skateboards not looking at anything, bouncing off other spectators like silver pinballs in the pinball machine. The walk around the track had turned into an obstacle course. No les then three kids blindly ran right into me and when I turned to tell their parent I couldn’t find them. The kids were totally unattended. Hello people, its not babysitting its parenting, and while I appreciate your proud that your chip off the old block makes you proud pounding the shit out of other players, you have other kids too. But then I looked closer, and half (liberally) of the males weren’t watching neither the kids nor the practice. What were they watching? Guess. No I don’t mean you should guess, I mean they were watching a woman wearing a tight Guess tee shirt, anmd they weren’t looking up at her eyes. This bullshit went on for three evenings straight, until Saturday. So what happened Saturday?

The girls took the field the Saturday to begin their season of women soccer. I have no doubt they wear some type of physical supporter, perhaps to protect their mammary glands for a similar reason as the jocks, and hopefully something that also offers them some protection from collisions on the field. What was glaringly absent was the support the boys experienced from the families. No family gatherings with Grandma an Grandpa in tow, no picture taking, no cougars hunting or tongue tied wolf Dads, no screaming and shouting, not much of anything. But let me tell you the girls played with every bit as much heart and determination even without a cheering section, or even a section. The praise, anger, or assurances of their coach was all they received.
I recently saw Billie Jean King in an in interview and apparently PBS made American Masters of her life and accomplishments. In case you don’t know who she is, she played tennis back in 1973 and has quite a resume of winning awards, but what she was most notable for back in the day was her competition against Bobby Riggs, a male tennis player who whether for show or for real acted the quintessential male chauvinist pig. He trash talked her into a showdown billed as “The Battle of The Sexes” and drew incredible attention. She beat Riggs decisively and struck a major blow against misogyny and for women’s rights including equal pay for men and women’s tennis tournaments. But deeper than that, she opened up the eyes and minds of a huge amount of males and helped make many male converts for the Women’s Lib movement. Maybe it should be required viewing in school because it seems our society needs a slap upside the head as a reminder that women are as important as men in all walks of life, including the male dominated genre sports.
Every time I find a young man or woman that are exceptional thinkers I feel like humanity is headed in the right direction. But too often it seems more like a huge step back into Neanderthal mentality with way more people working out to build their muscles in gym, and way too few building the most important muscle in the library. Too much emphasis is put on how we look and not nearly enough on how we think and that’s depressing enough, but if we are going to place so much emphasis on sports lets at least keep it on a level playing field. Truth told this existentialist would be happy without any sporting events because the fans are just too out of control but that’s a rant for another day. Today’s rant is about giving the ladies the same amount of support on and off the field as we do our boys. They play their hearts out, they work hard and they don’t quit. I get it, football is somehow more impressive and brings in money so its smart to spend money protecting their futures with a strap and a cup, but when it comes to making the effort merely to cheer the girls the families fall way short of athletic supporters.