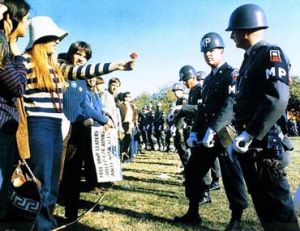 A lot is said whenever these “patriotic” holidays come around about supporting the troops and thanking a soldier. That’s a great sentiment but waving a flag around, or making your social media avatar a bald eagle or the American flag, and making sure everyone knows how much this person———————> loves their country isn’t what make us patriots. It’s an honest and sincere belief that our country can be even better and more free. That’s why this year I’m asking you to not only thank the obvious defenders of freedom, but thank a hippie.
Sound sarcastic or ridiculous? Not when you stop to think about it. The Hippie movement has done so much to help move the country forward, but much of the accomplishments are diminished by the stigma of heavy drug use. Its true, drugs were an integral part of the movement but it wa more a celebration of experimenting and making the “Establishment” angry that weed was better than martini’s. If you look beyond the drug use you’ll see a group of young people who embodied the spirit of the founding fathers as much as any other patriotic people in our history. Its not easy having the guts to stand up to years and years of policy and say “We’re not gonna take it.” It was that spirit, in the face of tyranny to take a stand for decency and humanity. I‘m not saying everything done was right and as with any group there were some extremists who took it too far, but overall the hippie movement was one of peace, love, and rock and roll. It created a giant cultural swing that allowed future generations to stand up to power an call bullshit!
The entire globe is facing many challenges and human rights is at the forefront of so many battles in the struggle for equality but it’s a challenge that needs to be faced. I sincerely hope we are currently on the brink of a new emerging group of people like the hippies that won’t just complain about the way the country I being run but find the courage and fortitude to stand up to the worn out principles and replace it with modern and more effective principles of governing that address the concern of this new era. I hope the young people of our times have what it takes to bring our country further up the road. Hopefully they won’t need to use drugs to establish that being rebellious is not disrespect, but an honest desire to make the world a better place.
So on this holiday, July 4th, Independence Day, remember that we celebrate it not because it marks the day that we defeated the alien with the help of Will Smith, but a day in which a group of rebels believed that it is our inherent right to live our lives in peace and freedom on our terms, not the term of a tyrannical fascist. This year I’m asking you to thank a hippie. So when you see an old dude still rocking their hippie roots, thank them, give them a beer, and if ya got em, light em up. Because when you come down to it, some things never change. Peace