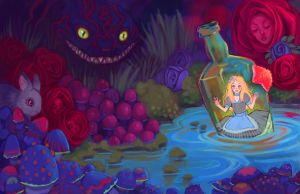 The biggest fish of the fishing rod, a thousand tales from Scheherazade
Saviors of the suicide squad that make us stop and think so hard
Should we disregard our own backyard or traipse on down the boulevard
Scary streets abandoned yards, play at risk of being scarred
Don’t blame the words of the traveling bard its only a tale
The storytellers veil to hide his wails
Be he poet or prophet or teller true
He gives freely of words to me and you
Words plucked from his heart become his art
Right from the start
He writes them down not for glory
Only wants to tell a story
To reveals our eyes to our mirror
Put perspective little bit clearer
So gather round come in nearer
Stand naked before his story moral
Thank him for his message oral
Once he’s gone only words remain
Because no one notices his barrel of pain
They only ask him to tell it again and again
Until he has no story left