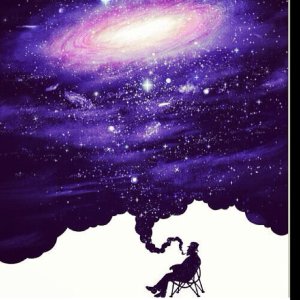 (An excerpt from “Cosmo And The Garden Earth”)

Now I’ve done more than my fair share of hallucinogens in my day but believe me this was no chemically induced manifestation. The most remarkable thing happened. Cosmo’s arms came right through my computer screen and grabbed by the shoulders. As if I had been transformed into a wavelenghth of pixilation energy I entered into the story coming face to face with the god I had been writing about. I was confused beyond galactic proportions, “Oh My Cosmo, did I die?” My mind was racing. No harp music, that has to be a good sign, but there he was as big as life. His voice was less godly than I anticipated, no thundering roars, just a friendly statement as if he were a college professor, “I understand you have some profound questions JT. Come with me and I will try to give you the answers. We’ll be traveling in a way you are unfamiliar with so just remain quiet and observe” I was stunned but in some sort of trance. Cosmo took my hand and even though I had a keyboard full of questions I walked alongside this sprirty thing in silence. We walked through some type of city street then through a building. I then realized it was the New York Stock Exchange but it was cold and unlit and we could hear people trying hard to yell over each other. It was as though I were seeing it in different dimensions piled on top of each other. Epiphany! We were. Through another dimension and we found ourselves walking through a bank, also cool and unlit this time filled with voices in a language I could not understand. Through another dimension we found ourselves in some sort of foreign government building, a palace or some ultra rich home, and finally through a concrete graveyard. Just as quickly as it had gotten cold and dark a light appeared and a wave of warmth spread over my body. We were walking along a beach I had gone to many times in my younger days, and then through the familiar streets of my youth. The city that watched me grow from a boy into a man. The schoolyard field I learned to place baseball in, the playground complete with see saw where I learned the mechanics and necessity of teamwork, school, cars, bars, all of my youth. He led to some sort of park that was filled with elements of my past life. Everywhere I could see and hear children playing and laughing. I couldn’t help but smile as Cosmo walked me through the most carefree times of my life. At long last we came to a path in a wooded area that led to a clearing. “There JT, over there. We can sit there and talk.” I almost ran up to the clearing and found a spot to sit. I had so many questions and I wasn’t sure where to start but as it happened I didn’t need to. Cosmo looked me in the eyes and this is going to sound strange but I got the feeling I was looking at everyone I had ever known. Cosmo spoke clear and soft. “JT, you have many questions and I will try to answer them as simply as possible. First you want to know the purpose of life?” He flashed me the largest and warmest smile I had ever seen.

Its not God that works in mysterious ways JT, its love. Love has the power to create mystery. You remember one of your favorite all time movies? How about this line, “You’ve always had the power to get home. You just needed to learn how to use it?” Its not a co-incidence that it’s a wonderful life came out the same time. “To my brother George, the richest man in town” Through entertainment Love tried in1933 to show you all what’s important and what is real, but it never caught on as anything more than simply entertainment. People still went about learning to hate, to be greedy and jealous. The opposite emotions of love overpowered the minds of humanity.” He sat and stared reflectively out at the children playing so I took the opportunity to ask a question, “Am I dead?”. Again the warm smile, “JT my son, death is not something to fear, its merely a stage. What’s important here is that you understand life, not death. Things are what they are because love lost out to power. The planet earth really is a garden, and it needs cosmic tending. All I’ve done is shown you your history. Just watch a while.”