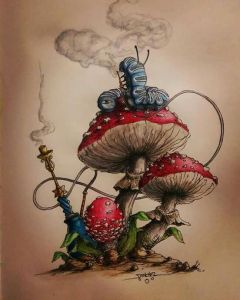 Sometimes its about nothing more than having some fun.. “A little nonsense now and then, cherished by the wisest men”* (and women)

Grinning and spinning through the vortex from the beginning
I was Frolicking and following without ever acknowledging
There a was a mushroom and a caterpillar smoking a painkiller
A laughing Phyllis Diller the strange theater was a chiller
Goddam it was like re-watching The Thriller in Manila
With Michael as Pop king and Ali as Godzilla
In short it was Killah I was as high as a Magilla Gorlilla
But…..

Time came for me to move my trippy high ass
But I was pushed or I fell through the looking glass
Filling my head with wonder
What a weird spell I was under
I truly hoped that this groovy high would last and last
Seems kinda crass but that’s all in the past
Because I was……
Floating and laughing down a rainbow river
My liver all a-quiver from a psoriasis giver
If my organs knew how screwed the booze made them shiver
Both my kidney and liver woulda quit liquor much quicker
Still I was just waiting, hallucinating and debating
If my imaginating was the real deal or if I was faking
It was deflatin’……
But whatever I drank made me pulse like a pheromone
Then made me shrink so I’d fit in this dome of a rabbit home
One sign said treat me
The other said eat me
I took them both and the shit really began to heat me
Opps now a retraction the opposite reaction
To my dissatisfaction the drugs caused a contraction
Lights flashing and laughing, splashing and thrashing
Sent my cold soul North of the pole
The icy Arctic circle had me feeling infertile
Time for some soup so I ordered Mock Turtle
Or was that still the herbal?….

Did a shot of Bacardi at one crazy tea party
The majority of the inferiority made a super majority
A march hare in a hat a rodent sleeping on a mat
A jabberwocky and a Tabby doing this and then that
A Cheshire smiling and inspiring that feline was beguiling
Disappearing and fearing until once again reconciling
I nearly shat when I saw only the teeth of that darn cat
He spat like a gnat so I prayed he was spayed
Didn’t know what else to say
So I found my way to a game of croquet….
With flamingo in hand I joined in the Queensland
And a hedgehog I slammed the deck of cards be damned
The spiky round critter not being a quitter
Fluttered and flittered biting the foot of his hitter
I screamed out in pain but all was in vain
The roses once white where painted red once again
I’m not sure what she said but the Heart card in red
Wanted someone dead so said off with his head
I laughed till I peed then fell to my knee
When SMACK……..reality
I simply didn’t see she was talking about me
Time to hightail and flee…….
I know I shouldn’t make this a habit
But once again I followed the white rabbit
My psychotic behavior
Is something to savor
So I just swallowed one more tablet
Cause I like the flavor
Props To Lewis Carroll, this was my absolute fave story as a kid and as a kid/adult. Some people tell me I should grow up but I tried that once and it was the worst ten minutes of my life…. Live and Love in Peace

*Willy Wonka……Special props to Gene Wilder, not even in my rather fertile imagination will there ever be a better Willy Woksa….Good Day Sir!!