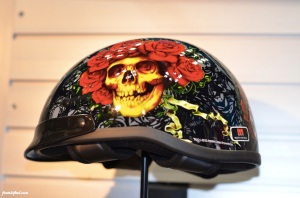 Disclaimer…in order to preserve the integrity and anonymity of the motorcycle group in this story as well as my own personal protection for disclosing a few of their not so well guarded secrets I will refer to the group as the “Infidels” Infidels were original a name given to anti-Christian religions, kinda like Pagans. So this MC Club are the main rival club of the Angels from Hell and their name has Pagan roots. But I never said that……..

It Won’t Be Long Until You Belong

For reasons I won’t discuss I found myself a temporary resident of a safe house with the Infidels Motorcycle Club. Suffice to say my best friend Archie, who I knew since kindergarten was a member in good standing and it was at his request I was kept away from the world under the protection of his brother Infidels. It was keeping me safe more from myself than anything insidious but there I was, surrounded by a lively bunch of guys whose most obvious flaw was forgetting or simply not caring enough to bathe. (If you know a biker please don’t tell them I said that) To be honest once in the safe house where they let down their guarded style of confrontational outlaw anger and angst they were a remarkably gracious and fun group. They joked both with and about me and I kidded back in an extremely cautious manner. That said it was still my best interest to be aware and respectful of the clubs hierarchy.

The Bayshore Infidels are highly organized motorcycle club chapter with strict chapter rules and a deeply revered caste of social status within the group. My friend was a member in good standing but he had no special attributes, which basically meant he hadn’t earned upper club status through doing time in prison, beating the hell out of a rival club member, or earning the ultimate title of ITCB. That essentially intimated that the person removed an obstacle for a higher up. I Took Care Of Business (ITCB) loosely translates to I’m a homicidal maniac and if you fuck with any officer of our brotherhood you’ll be dead before you can apologize. Archie was a kind and mellow friend back in the day so it came as no surprise he hadn’t reached any of those statuses. Yet. He had however developed a certain air of violent behavior I hadn’t seen since we fought over Tonka toys and Lincoln Logs in kindergarten, and was quite intent of getting me to join his newfound club.

Archie explained to me how I could start off in the socially admired position of “hanger around”. The hanger around has literally no status with the club but is permitted to go on beer runs and clean up after parties to include numerous piles of stale beer stinking puke stains, piss puddles, and an array of DNA treasure troves so gross you don’t even want to guess at what they are or how they got where they did, let alone whom they belong to. As appealing as that sounded doubt had already begun churning up in my stomach. If you last past that for a year or two you may find yourself a member willing to sponsor you. Then you become a prospect and are allowed to begin proving yourself loyal. You do this in a number of ways which may involve getting into a fight with someone who disses the Infidel colors or someone’s bike, or by taking care of the wounded, and by becoming an official gopher and basically holding your head high while any and all members emasculate dissect embarrass harass and generally shit on you for everyone else’s amusement. Not able to wear colors as a prospect but at least no longer on DNA scrub detail unless there were no hanger arounds around. After that the levels and their status in the brotherhood vary but it sounded like a bloody violent and downright disgusting form of fraternal challenges that go on for a very long time before you earn the right to wear the patch, and add 1%er to you jacket. To be honest it sounded more like an unending audition for The Ultimate Jackass Movie featuring The Marquis De Sade.

But anyway I was here as a guest not a hopeful wannabe outlaw on two wheels despite the promise of oodles of drinking, smoking, and ass kicking. Besides, by the look of these behemoth brutes in this safe house it would more than likely my ass that would be on the kicked end and I‘m just not a fan of having my face nor my ass bloodied up. So it was with a modicum or more of trepidation that I joined in the fun we, or at least they were having. For lunch we had a six pack of Pabst Blue Ribbon premium beer. Aside from my sarcasm PBR’s were a staple not only with the biker crowd but also with the middle class kids that never got allowances so it wasn’t actually out of my social stratus anyway. The shit was cheap and good, two qualities us young know it all dudes liked in both beer and women. So it wasn’t an unfamiliar lunch but considering I was being “kept safe” it did lack a certain nourishment. That aside, it did take the edge off which was helping me get through my 3 days of safe house rehab. So the lunch was good but lacked any substance, but dinner hadn’t yet been considered. For dinner we had two six packs of PBR’s which while not much in the way of real vitamin intake it was jam packed with psychological vitamins. By seven o’clock my head was so numb nothing else mattered, which was after all why I was there in the first place.

I’m guessing it was more of Archie’s girlfriend, or “Chick” or “Mama” Lauren who decided we all needed something solid in our stomachs but at any rate at around 1AM or so Archie, Lauren, another couple who I won’t make a fake name for because I have no clue what their real names are anyway all packed in to a cage(a non motorcycle four wheeled vehicle) and headed out to a dinner. To the best of my compromised recollection I ordered Belgian Waffles. I say this because both Archie and :Lauren laughed their respective asses of the next day telling me I kept calling them belching waffles because my PBR diet had caused an enormous excess of gas.

The truth is I have very little memory of the diner or the waffles let alone any clue as to what I may or may not have said. Suffice to say it was an interesting first safe day with the Infidel Motorcycle Club who were all compassionate endearing, and even charming when away from the perils of everyday life among the citizens. I am forever in debt to to them for holding my hand through a very tough period of not just the three days I had hoped for but extending my safe visit for a five day experience I needed. That group of outstanding if intimidating riders helped me move on with my life free from at least one evil that no longer had it’s deep claws stuck into my circulatory system. Archie and I lost contact again but I have heard that he has since passed, and I haven’t a clue what became of Lauren or any one of the beautiful souls who saw me through my predicament but still I will love them forever.