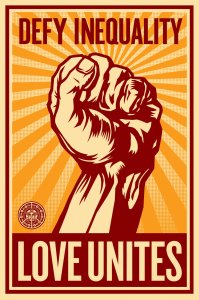 Listen, I’m not a racist but……. But what? You play one on TV? Chances are if you start off your statement by prefacing the fact you’re not racist you’re about to make a racist remark. In reality though what’s happening is you are merely afraid of being labeled a racist. Here’s the good news. Racism isn’t a label, it’s a defect. So you are NOT in fact, a racist, you are a defective human being.
Now the bad news. If you also insist that racism no longer exists your not merely a defective human being, you’re an ignorant defective human being. And you may also be a racist.
But it gets worse. If you claim you’re not a racist because it no longer exists and then after viewing documented and taped proof that racist activity has occurred and then you claim “they” always have to play the race card you probably use stupid phrases like “Oh, he’s one of the good ones” and you are in fact a despicable ignorant racist human being. Get your act together, there is no them only WE…live in peace