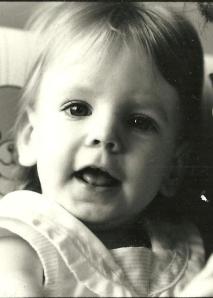 Time passes and life goes on but we all have certain events in our timelines that choose to linger, sometimes even haunt us, reminding us of sad days embedded with grief and memorialized annually through dates on our calendars. Time passes, with age comes wisdom and I’m told time heals all wounds. Bullshit, time flat out refuses to heal the deep wounds of the heart and soul. Those wounds never fully heal and the scars open up because of certain triggers, such as anniversaries. Such is the case for Maureen and I today, the anniversary of the day cruely etched deep into souls of our memories and our hearts. October 23rd was the day we had to let our 19 month old daughter go.

Every year this dreaded day slowly creeps up on our hearts to pierce them with painful memories. A few months back while sorting through some photographs I came across a piece of paper I had written a poem on. It turns out this paper was something I wrote many years ago to counter the pain of our loss by replacing it with the memory of Megan being home, giggling and smiling, walking despite doctors prognosis’s, and squeeling with happiness for the eight days she was home with us after a successful heart transplant. Those eight days mean everything to us, and its that memory we try our hardest to hold onto. I had planned to post it today but realized I’m not yet ready to reveal that particular poem, that part of myself, but I still want to put some focus on the need for organ donation awareness. So I chose to share the story of eight days.

From birth our tiny little baby girl had to fight the odds. By three weeks we were already in a hospital with her and before she could even crawl we had been with Megan through blood tests, prods and pokes, and even a spinal tap. I still remember how tightly she squeezed my finger as she cried from pain and confusion, leaving Maureen and I without the luxury of breaking down. Megan needed us to be strong for her. But in the end it was Megan who had shown us strength, taught us about life.

Megan had Cardiomyopathy, a viral disease which causes myocarditis, an enlargement of the heart. As she grew so did her troubles until one ugly Sunday morning her heart seized and she stopped breathing. We heard Megan’s gasps on our baby monitor and ran to her. Because I had learned mouth to mouth as a young boy I covered her mouth and nose with my mouth and began breathing into her lungs while Maureen called 911. The EMT’s arrived in minutes and whisked her away to the ER. We got our selves together and went to meet her but when we got there she wasn’t there yet. We had no idea at the time but the EMT’s had stopped the ambulance to use a pediatric defibrillator on Meg. Meg was admitted to the ICU and later that evening we were told she would need a heart transplant to survive. A jack hammer to our hearts. Subsequently Megan seized again in the hospital causing a mild stroke which left her weakened, unable to hold her head up for any significant length of time. Maureen dedicated every second of her life to Megan’s physical rehabilitation as I meandered mindlessly through my job relieving Maureen when I got home by entertaining our baby girl. Together we traveled to Philadelphia, only to have doctors there say she would never be able to walk and most likely unable to talk, so Megan was removed from the transplant list.

This only increased Maureen’s determination and the hard work paid off when Columbia Presbyterian Children’s Hospital placed Megan back on the transplant list. Organ donation awareness was tragically negligent at the time and Megan’s chances were even further hampered because of the size of the heart needed. As a parent it is the most difficult position to ever find yourself in, knowing the only hope for your child is dependant on another parent losing theirs, and willing under horrendous circumstances to make the choice to donate their child’s organ. So we understood that we got fortunate because of another parents nightmare when the call came to bring Megan into the hospital for a heart transplant. The true definition of bittersweet.

After an agonizing night with our family members the doctors told us Megan’s transplant was successful. We were able to breath again but not for long as it was another four weeks of rehabilitation in the hospital with our tiny baby daughter having blood drawn a few times a day, temperature and blood pressure taken almost hourly, and the seemingly endless wait to make sure the anti-rejection medicine kept her little heart beating. Maureen lived in the room with Megan sleeping on a chair everyday and I took an SRO room a few blocks from the hospital, worked in the day and stayed with Maureen and Megan until eleven PM. We literally had residence there, our neighbors were children and their families in the cardiac ward with us, and the outstanding nursing staff who all treated us as family. They laughed with us, they cried with us, some even brought in homemade meals for us. The day we were told it was time for us to bring Megan home was the first time we cried from joy in over a month of tears brought on by the pains of Megan’s ordeal.

Going home was a huge relief shared by all of our friends and neighbors who had set up a welcome home celebration for Meg. Banners and balloons, Meg took it all in as if she knew it was for her. Unfortunately because there was so many people and potential germs we couldn’t allow her to stay long, but I truly got the sense she felt important, maybe for the first time. We took her inside and she immediately wanted to get in her walker and run around the kitchen. She was stronger than ever before and she was motoring around in her walker like a NASCAR driver, squealing and laughing. She would watch Sesame Street and applaud, her favorite character was Grover. Mine was too. Every night when I came home from work Megan and I played with her toys, an array of stuffed animals Maureen had been using in her physical therapy. I named them and made up stories with Jolly The Clown, Candy Camel, Chocolate Moose, and Lucinda Lamb. Life Had never been sweeter and our home was filled with joy and love, with Megan sharing in the joy with just as much vigor as us. Megan’s anti rejection medicine was working, she was beginning to develop normal child activity, many months behind but plenty of time to catch up. Or so it seemed.

After eight days there was a set back, and Meg returned to the hospital. It would be her final visit there, she was placed in ICU because she had contracted a serious infection, and with her immune system compromised she was unable to fight any longer. But the night before she re-entered the hospital, Maureen called out to me ecstatically, Oh my God Keith look, she’s walking. It wasn’t a long walk but it was a victorious walk, and she was so proud of herself. She knew she had accomplished something special. Those were the eight best days of Megan’s short life. We spend time with our children and invest in them by teaching, showing our kids right from wrong, weak from strong, basically how to cope in an uncertain and unpredictable world. But it was Megan that taught us about life. In return for all the sacrifices and heartaches we endured, we were rewarded with eight days.

Eight days. Eight days we remember so well and try so hard to focus on to replace the agonies we suffered getting to those days. Eight days when our little girl showed the world how much her strength and perseverance paid off. Eight days of bliss with Megan. Eight days we would never have had if not for the extremely courageous decision one mother made when her son had been killed in an accident. I tell you this today not because I am seeking sympathy, but because I am looking for help in getting the word out that we need more organ donors. In the years after our ordeal we have continued to try and get the word out, because in the end Megan’s surgery was successful, if only for those eight days. Maureen has gone on to become an altruistic kidney donor and was involved in a chain of eight people who received transplants because of her link. Eight days, eight people in the chain. Is that number just a coincidence? It would take a far more clever person than myself to know for sure if its coincidence or if there are more profound forces at work. We can debate about fate, destiny, divinity, Gods of all shapes and sizes, Pros vrs. Cons, collective consciousness, or random theory. Maybe its just the universe conspiring but for me the answer is a bit more simple. Its all about love. Make your love eternal by donating your organs.

Today monumental strides have been made, and perhaps if it had happened today this would be a far different story. Either way it’s a story of love, hope, dedication, and courage. Donating your organs is easy, get on your computer and got to http://donatelife.net/organ-donation/…That’s Donate Life. Or go to UNOS and educate yourself. Tell your friends, your family, anyone who will listen, help get the word out. Make your own personal wishes clear to your family so no one else is left with the tough decision of what you would have wanted.

One time someone who was unintentionally insensitive asked me “Was it worth it all, for just eight days?” The short answer is yes, it was worth seeing my baby girl stand, to make normal baby noises, to just be happy. Yes at times it’s difficult, every year we wonder what Megan would be doing as a ten year old, an eighteen year old, a twenty one year old. Each year we reflect and wonder how her and Kellie would have been as sisters. And yes every year as October begins rolling around we become sadly contemplative, but the memory of those eight days helps ease the anxiety. When you have a child with a catastrophic illness or a disability you hang on and treasure every tiny thread of hope available because sometimes that’s all you have. We treasure every second we had with Megan.

I used a number of clichés here on time and love, but I want to leave you with one last cliché. Life is short. Aside from sharing this story I would like to also share my perspective on time, life, and love. Don’t waste time, live your best life, spend quality time with your children, (By far the best investment you could make in their future), and spread love. The more love you give away the more you end up getting back. Life is indeed short, and it can be lost in a heartbeat.

I would like to thank the TRIO (Transplant Recipient International Organization) and the great friends we encountered there, the staff at Columbia Presbeterian Children’s Hospital for all the caring love and support they gave not only to Megan, but to Maureen and myself as well, most especially the nursing staff who had to help us to understand much of the gibberish doctors threw at us, and the good folks at UNOS and Donate Life who continue to work hard at brining awareness to the need of organ transplants. If you aren’t a donor, please become one. Thank You

7 thoughts on “Eight Days With Megan”