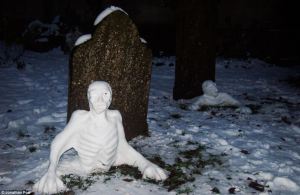 Oh my God Northeast , have you seen all that white stuff? And my doppler radar forecasts much more of it lasting a whole bunch of hours. Since we aren’t sure of how many hours, all TV stations will cover the storm 24/7. We have experienced journalists who spent countless hours in school for just such an occasion, to go to neighborhoods performing dangerous stunts like sticking rulers in the snow banks or watching people spin their tires in the snow. Possible in the exact spot they all froze eggs in pans two weeks ago ….Don’t look now but it’s the snowpocolypse, the hailmaggedon, the end of the non snow world as we know it. The heavens have opened the freezer door and are defrosting it right on top of us. Its sure to thaw out the snow zombies. What are we gonna do?? I know, we need to flood the grocery stores and remove all of their milk, bread, water, and eggs. That’s the only thing that can stop this global warming disproving climate threat. Then we can run to Home Depot to make sure all of the salt bags, shovels, and snow blowers are all gone. That way, when the snow zombies come around they won’t have the staples of life. I suggest full body armor when you hit the supermarket because you will nee to fight off the geriatric special opps troops attempting to stockpile food for their underground shelters.
This storm is unprecedented, like nothing anyone in the Northeast has ever had to deal with before. Oh sure you may hear some of the elders chatting up about past blizzards before but that was before the snow zombies existed. And they are poised to attack!! Fortunately the government has intercepted their communications, (how do you like the NSA now, doubters?) and have a fantastic line of defense. They are soaking all the roads in brine so when the zombies attack, they will be tempted by sauerbraten turnpike. So buy as much milk, bread, eggs, and water and lock yourselves inside. No work, no school, no nothing. Do Not Attempt To Fight The Snow Zombies!! They are waiting outside making snow angels as you read this. Stay ssafe, I hope to see you all back here in the thaw…..