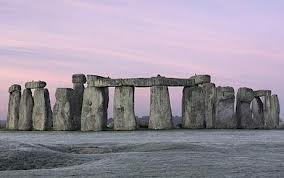 Behind The Music, Stonehenge Stock , 420 BC
J.T. Hilltop

Woodstock is considered to be the first ever mass gathering of a rock an roll concert although many, myself included would argue it began at The Monterey Pop Festival during the summer of love. But recent discoveries by archeologist show that we are all wrong, the true first weekend of peace love and music was put on by the Pagans in the UK at a place called Stonehenge in 420 BC. Back then it wasn’t called rock and roll, it was called stone and stumble and it was part of their counter culture. Take this recently found papyrus music sheet with song lyric scribed for the popular Pagan harmonizing genius’s Crossbow, Whiskystills, and Nash-hash:
Stonehenge
I came upon a child in the fields
Whilst walking along the path
I enquired “where dost thou walk to”
And this is what he told me
I walk along to Maximus Yasgurwoods farm
To join in a stone and stumble band
Set our camp along the henge
To seteth thy soul free
(Chorus)
Thou art starburst
Thou art goldstone
And we gots to plant ourselves back in our garden

This relic was found with other ancient artifacts including a lute played by Jimi Henbicks and a clown nose belonging to Wavy-Ravey leading scientists to believe that Stonehenge was indeed built as a stage for Stone and Stumble bands across the UK back in the day. WAY back in the day, 420BC, The Flintstone years, 10 million strong…. and growing. The Stoners Age when Bedrockpalooza and Occupy Rock Quarry were popular. Archeologists now believe that the Stonehenge ruins are all that’s left of an enormous soundstage which played to thousands of young partying Pagans, some who danced naked and took to frolicking openly, many while under the influence of barleycorn weed, a popular and tasty intoxicant when smoked. That weekend celebration of love, life, and music changed their world forever. Well actually it changed it only until the brutal Roman soldiers invaded the land of Pagans forcing them into chains of Christianity but before that devastating event the only event anyone spoke of was the three days of Love, Peace, and Music (and rain) on Maximus Yasgurwoods sheep farm known as Stonehenge Stock.

Stonehenge Stock was the brainstorm of childhood friends Ian Kellerlay and Declan Mc Intyre of Brea Scarra Off the coast of Scotland. They had the incredible insight to create a venue that could unite all the various music styling’s of the UK. With top acts like the blues singer Janus, Canned Campfire, Dublin Bay Dirtwater Revival, Countryside Joe McDougle and the fish, Worcestershire Zeppelin, The Ungracious Dead, Jefferson Chariot, The Immobile Stones, and The Salisbury Hill Stompers, nine music scenes in all would be represented. Each of the nine music scenes were represented by a giant stone indicative of its region. Represent!

The festival lasted three days and nights showcasing some 30 Stone and Stumble acts to almost 40,000 jubilant attendees. The crowd was so large the New English Chariot Thru-way was closed. Lotta freaks man! Tremendous efforts were made to feed the crowds, nearly 500 pounds of haggis was consumed. Breakfast in bed! Two children were born, a number of rug burns and other rug related casualties occurred, and one person died but all in all the festival was considered a huge success. Or disaster, depending which news media you listen to. This is Behind The Music, the truth behind Stonehenge Stock 420BC, The three part series presented by Be My Bud, the leaders in the legal marijuana industry
Tune in Next Friday for part I