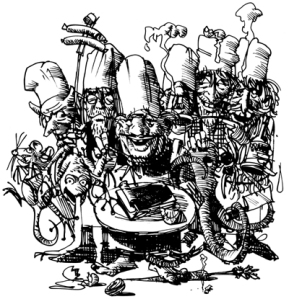 Working at Windows on the World was the most awesome experience I ever had in the restaurant industry. Fast paced and crazy during service but the waitresses were gorgeous. In fact the waiters were gorgeous too, most of waitstaff were Bohemians. The war between the front and back of the house was non existent because the expeditor was a buffer between the two factions and took shit from all sides. The pace of service was so intense we never really had time to build up animosity anyway. But nothing in my career has ever compared to the camaraderie in the kitchen.
Eight cooks on the hot line, four in the pantry, an a dozen or so prepping, and about sixty workers in the kitchen at any given moment. In the kitchen we spent what little quiet time laughing and getting to know each other better. It was like a damn fraternity. For four hours of service we were all we had to rely on, we all had each others backs. We snuck extra chef coats to each other, beers, joints, whatever. We got high after service and met for drinks before heading out to our homes or wherever we went. We became extremely tight nit.
The thing that I remember most was my last day there. They have this cute little ritual they perform for the people that leave that they love. And I was well loved, the hippie cook who played the harmonica into the expediters microphone, made everyone recognize the moment of silence for John Lennon during the global memorial at his death, and the teller of numerous jokes and puns that kept them chuckling for hours. So I was destined for their ritual which to be honest made me happy despite what the ritual consisted of.
In the back of the kitchen were three huge cauldron kettles for soups and the like. Considering we served over a thousand people a night the kettles had to be big. For the last day of any coworker they loved they reserve the largest kettle on the end filling it with an array of obnoxious liquids. Outdated fish stock, outdated eggs, vinegars, wines, anything they could find to make a disgusting smelly bath to dip the departing warrior in on his last day. My last day!
When the shift ended I knew it was coming because I had seen it before. Some fight like hell and end up getting bruised up, some try to sneak away before anyone grabs them, and some, like me, take it as a sign of love and a sort of torch passing. I passed by that kettle two or three times and I gotta say they really went all out for me. Stunk like rotted skunk anal glands, ripe with overripe vegetables, fish guts, and many things I decided were better not to try and identify. This was going to be one gnarly shit bath and I am going to be stinking for days.

My time came, and my coworkers grabbed me and dunked me like four times, worse than Ollie Dee from March of The Wooden Soldiers. I kicked a little and made a big scene out of it but in truth I went in it willingly rather than fighting a losing battle with ten ornery line cooks. Besides I wanted them to have as great a memory of my last day as I would. A lasting memory, although mine would have an added lasting effect of carrying around an odiferous array of decayed and rotted stenches for the next day or three. I came out dripping with gross puddles of digestive waste. Needless to say I gave them all hippie hugs which they tried in vain to escape always happy to share. I always shared my weed and beers with them so I felt it only proper to share my nefarious lingering funkfest of stink.

What I hadn’t considered was my trek home. Even after washing and changing into my street clothes the elevator ride down 106 floors had people congregating as far away from me as possible, and at least two women gagged at the fetid aroma. I was like a walking silent but deadly rank fart after an evening of beer and eggs. I had visions of a visible stench trailing behind me like a stink shadow. Everything in my wake gasped for air. Everywhere I went people turned to look at me shooting me snarly looks. I had no dog to blame and it was clear I was the epicenter of the situate of smell. I stopped in The Market Bar on the ground floor for my last drink with the crew and the bartender asked me to leave. From there I got on the E train to take the subway up to midtown. I felt like Pigpen from Peanuts as people moved to the other end of the car. Finally I decided to ride the subway in between cars hoping the wind would remove some of the foul smelling carousel around me.

But the aroma offended any in its path, even me. Its not like when you let one slip out and wonder why everyone holds there nose because being the owner of the fart, the one who dealt it, the smell never quite seems as bad. But this odiferous cloud of decayed matter clung to me as if it would never let go even offending me. My olfactory senses were forming an official protest threatening to impeach me if I didn’t shower and scrub with entire bar of Irish Spring and then douse every inch of my body in cologne. If I hadn’t gagged six times already from the stink stream I would have been offended but I knew I was about to take the advice willingly.

When I walked through the door I was greeted as I was every night, with the most enthusiastically happy hound on earth, my Afghan Hound, Stella Blue. No matter what kind of day she had she was always overwhelmingly happy to see me and shower me with canine affection. Unfortunately not one second after jumping up on me her ultra sensitive nose began twitching and I know dogs are not supposed to register emotion but there was serious disappointment in her eyes as she stared at me, shook her ears back an forth and ran the other way. Into the shower I went before any further embarrassment. I decided I needed to burn the clothes and I showered four times in a row. I then marinate myself in so much cologne I could have driven a taxi. It took me three days to completely eliminate that dark cloud of revolting essence of BO emanating from my body, and while the “O” finally skulked away the memories of Windows On The World has never faded. Stella finally got her groove back and forgave me, and the ten dozen or so flies that followed me home that night have since relocated. All in all being dunked in a kettle of decomposed shit water was like a dis-initiation imparting not just the squalid stink but a memory of a lifetime to always take with me for surviving that intensely hot and brutally fast paced kitchen, and if my memory serves me correct I loved every stinking second of it……PEACE